The workers in many different industries — manufacturing, logistics, and construction to name a few — rely on heavy equipment and machinery to perform their jobs. The workers who operate this machinery, along with their supervisors and employers, typically take every precaution to maintain a safe workplace, including using the machines safely and only as intended. Nevertheless, many workplace accidents resulting in injury or even death are caused when a piece of equipment fails. While every state has some form of  Workers’ Comp legislation designed to alleviate the financial burden faced by workers injured in on-the-job accidents, sometimes an injured worker may be entitled to additional compensation on top of the Workers’ Comp benefits if the injuries they suffered were caused by negligence that led to an equipment failure or malfunction. These civil legal cases are known as third-party claims, and in this article, we’re going to examine third-party liability as it relates to equipment failures caused by mechanical or design defects.

What Does Workers’ Comp Do?

But first, let’s do a quick review on Workers’ Comp and its role in workplace injuries. Between 1911 and 1948, every state in the country passed some form of worker’s compensation legislation. These laws were designed to provide benefits such as lost wages and coverage of medical bills to workers who were injured on the job, regardless of who was at fault for causing that accident or event that led to the injury. In fact, employees injured in a workplace accident are prohibited from suing their employers in a majority of cases.

Therefore, a worker injured on the job will almost always be entitled to some form of workers’ comp benefits. But in some cases, an injured worker may have standing to file a civil suit against a third party (other than a fellow coworker) if that third party’s negligence is what caused the accident that led to the injury. It’s important to note that this third-party claim would be for compensation on top of the workers’ comp claim. And one of the more common third-party injury claims involves negligence that caused a piece of machinery to fail. But as we shall see, determining the liability in these cases is not always easy to due.

Sometimes, the flaw in a piece of equipment goes back all the way to the drawing board when that equipment was first being designed and built. A design defect results from a poorly designed or improperly tested product or item. If this improperly designed or tested machinery fails on the job causing injuries in the process, the equipment’s manufacturer may be liable if there was a foreseeable risk posed by the equipment if it was used for its intended purposes. In order to prove liability, the injured worker’s legal team would have to show that the risk posed by the equipment could have been reduced or avoided by the adoption of a feasible alternative design that meets the following criteria:

For workers injured on the job from an equipment failure due to a suspected design defect, it is crucial for them to consult with an experienced legal team with expertise in third-party liability claims since these cases can be very complicated and difficult to navigate.

As with any workplace accident, the first step in getting justice for the injured party is to determine liability. However, sometimes a piece of equipment fails on the job even though it was flawlessly designed. In these cases, the negligence of someone other than the equipment’s designer or manufacturer likely caused the equipment failure. The challenge is finding the negligent party.

Is the employer responsible? Well, every employer in the country is responsible for maintaining a safe workplace free of known hazards. Additionally, employers are required to comply to the standards set by the federal Occupational Safety and Health Administration (OSHA). To win a mechanical defect lawsuit against your employer, the injured worker’s legal team must prove “gross negligence” or a “wanton disregard for safety” led to the equipment failure.  This means proving your employer did something knowingly wrong or failed to act to correct a potential hazard even though the employer knew that employees could be injured. Examples of this type of negligence include:

As with design defect cases, mechanical defect third-party liability cases are often just as complicated. Injured workers who think they may be able to file a civil lawsuit against a third party that caused the mechanical failure should be sure to work with a legal team that has the specialized legal expertise to pursue third-party injury cases that are beyond the scope of traditional workers’ compensation.

How Are Injured Workers Compensated in Successful Third-Party Claims?

It may be somewhat grisly to think about, but the bottom line is that the compensation that may be awarded in a successful third-party injury case will often come down to the nature of the injuries the worker suffered in the accident caused by the machinery. Some of the common injuries caused by equipment failures include:

Sometimes an injured worker may be entitled to additional benefits if they were disfigured or scarred, especially if the disfigurement occurred on their face, neck, or hands. In other cases, an injured worker may be compensated if their injuries cause them to lose a specific bodily function. Examples here include blindness, the loss of a limb, or paralysis. At the end of the day, the compensation amount will typically come down to where the disfigurement or loss of function is located and how severe it is.

Were You Injured on the Job?

This article is for informational purposes only and is intended to provide the reader with an overview of just a few of the many considerations that arise from a workplace injury involving equipment or machinery. If you or a loved one are ever injured on the job where third-party negligence may be at play, it might be a good idea to consult with a legal team that is experienced and has a proven track record of success in winning third-party claims.

Get a Free Case Evaluation 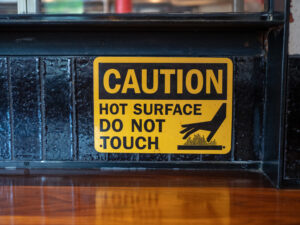 Failure to Warn or Label Equipment

When equipment is improperly labeled, it can lead to a myriad of potential injuries and even death in some cases. Everything from simple cuts and abrasions to broken bones, severed limbs, electrocution—the list goes on and on. Fortunately, there are laws in place to protect people who are injured on the job, including due to […]

Caught In or Compressed by Equipment

Your workplace can potentially be dangerous, with many hazards that could potentially result ina life-changing employee injury. While most are familiar with slip and fall injuries or repetitivemotion injuries, there are other types of dangers, including being caught in and caught betweenhazards. What are caught-in or caught-between hazards? As the name suggests, these refer to […]